During the month of March, CUNY Academic Works grew by 164 new items, received 48,355 new downloads, and reached a new milestone! Almost two years since the soft launch of CUNY Academic Works in March 2015, content was downloaded over 500,000 times. This number only continues to grow as CUNY-generated white papers, peer-reviewed journal articles, and student theses are downloaded from all over the world.

The five most downloaded works in March include:

The Office of Library Services is pleased to announce that CUNY Academic Works now offers increased preservation via a new service, bepress Archive.

Content on bepress platforms has always been protected by an infrastructure that includes multiple backups as well as long-term storage with Amazon Glacier. These services will continue, but by adding Amazon S3 (Simple Storage Solution) via bepress Archive, the Office of Library Services will no longer receive quarterly archives of content to store on local servers. Instead, we have a real-time archive of all content on an industry standard-platform that provides 99.9999999999% file durability, performs checksums for data integrity, and uses redundant data to repair any corrupted files. These additional features are especially important as researchers across CUNY look to submit their research products—including their data—to CUNY Academic Works in order to comply with mandates from federal and private funding agencies.

For more information, please see the blog post on the DC Telegraph or contact the Office of Library Services. You may also be interested in Amazon’s video promoting its service:

Here it is:  version 2.0 of our new OLS Dashboard: 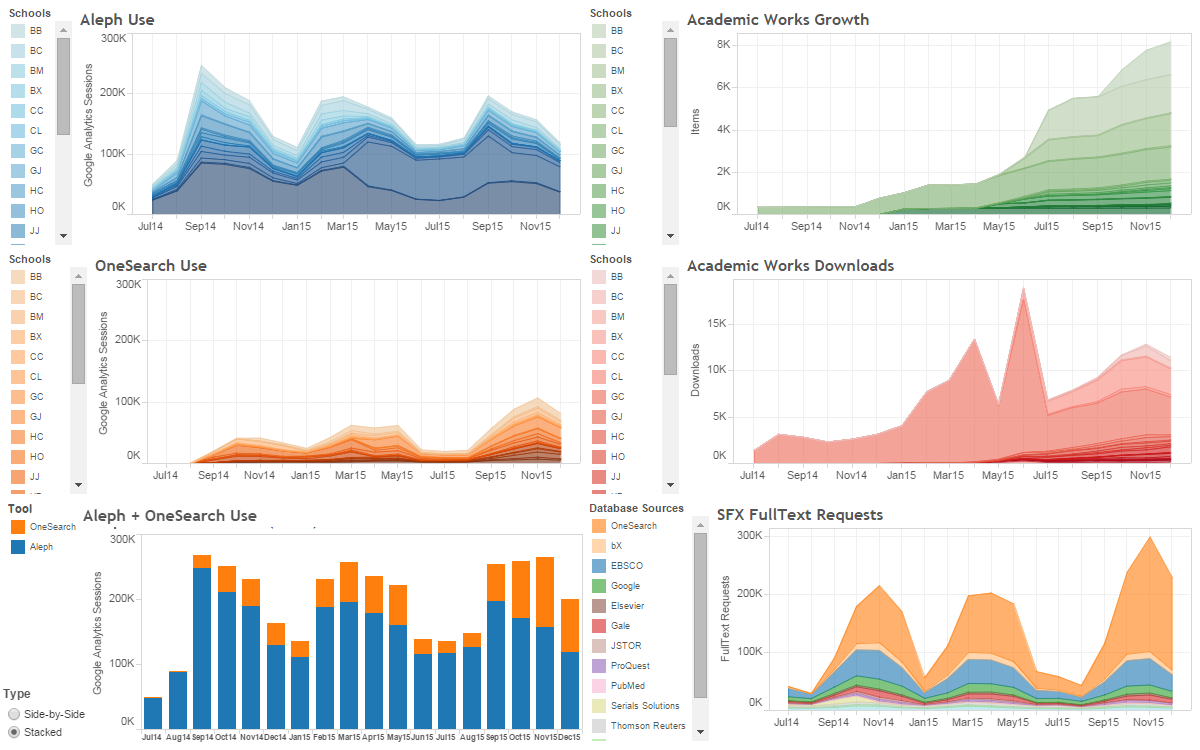 You can enter the OLS Dashboard from the link above or go directly to a full view of any of the included graphs via the links below:

Information about the source data for each of the graphs is displayed at the bottom of the individual graph page, not on the overview/dashboard page.

OLS is currently using Tableau Public’s free service to bring you this information. (Check the Tableau Public Status page if you can’t get to our OLS Dashboard.)

[Note that this blog post was updated on 27 April 2016 to point to v2.0 of the OLS Dashboard.  The image at the top is still the original v1.0 OLS Dashboard.]

Back in November of 2011, the CUNY University Faculty Senate passed a Statement and Resolution on Open Access – a resolution which supported the establishment of a CUNY-wide open access institutional repository and which has been a guiding document in the development of that repository, from its collections policies to its mission and goals:

CUNY Academic Works is a service of the CUNY Libraries dedicated to collecting and providing access to the research, scholarship and creative work of the City University of New York. In service to CUNY’s mission as a public university, content in Academic Works is freely available to all.

While the mission and goals of Academic Works are clearly stated, it’s understandable that the first steps to meeting them can feel a little uncertain. Therefore, in order to support the Libraries as we embark on the trail to a more open CUNY, the Office of Library Services communicated three actionable goals for our first 18 months:

Sound familiar? OLS has been busy getting the word out about Academic Works since the kick-off this March, and, less than four months later, CUNY Libraries has met its first goal. In fact, we passed it. Thanks to the commitment and hard work of CUNY librarians, eighteen (count ’em, 18!) of twenty-four institutions have their first collections in the repository within four months. And these initial collections have us well on our way to meeting the 18 month goal; they include 2,500+ items spanning from traditional journal publications and monographs to data sets, student work, open educational resources, and archival collections that capture the history of the University.

CUNY enters the scholarly communication landscape at an exciting time. It’s a time that some find reminiscent of the wild west (and it certainly has its good, its bad, and its ugly), but it’s also a time in which CUNY has the opportunity to pioneer the way.

Academic Works: On the Road

After the Academic Works Kick-off this March, the Office of Library Services hit the road to get the word out about CUNY’s new open access institutional repository. This whirlwind campus tour includes the official CUNY Academic Works Roadshow, as well as smaller strategy sessions and larger public outreach events. Overall, we’ve visited sixteen campuses in March and April — sometimes two or three times!

The Academic Works Roadshow has come to eight campuses with at least two more scheduled in May. These visits include a presentation that briefly covers the history behind a CUNY institutional repository and details the collaborative support model that will lead to its success, but, more importantly, the Roadshow is an opportunity to start a conversation about what Academic Works will look like at an individual campus. If you’ll forgive the buzzword, each library has its own challenges and opportunities when it comes to the repository, and OLS is committed to learning more about what these are in order to provide support.

CUNY librarians know their campus community better than anyone, and we want to listen to what they have to say. So in addition to the Roadshow, OLS is meeting with librarians one-on-one to work through particular aspects of the repository initiative (i.e. What would it look like to include instructional materials in the repository?). We’re also participating in CUNY-wide conversations, including those at the LACUNY Archives and Special Collections Roundtable and the newly formed Library Technology Subcommittee of the CUNY Committee on Academic Technology.

In addition to getting the word out to CUNY Libraries, OLS is working with those libraries to get the word out to their campuses. The Scholarly Communications Librarian has given multiple presentations about Academic Works and led workshops that address issues ranging from author’s rights to creative commons for open educational resources. OLS has led over ten events so far, but for those librarians who want to lead workshops of their own, we also share presentation slides and handouts that can be reworked and made their own.

We’ve had a lot of conversations and a lot of fun over the last few months. If you would like to bring the Roadshow to your campus or schedule an event or training, all you have to do is ask. E-mail the Scholarly Communications Librarian, Megan Wacha, and we’ll be right there.